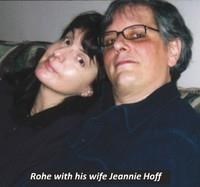 Chris Rohe, a fixture in the Chicago book world for over 40 years, died at his home in Evanston on May 17. He was 61.

Born in California to, Paul Stewart Rohe, a field editor for Random House, and Lilette Crenshaw Rohe, a Paris-born ballet dancer, Rohe was raised surrounded by a love for good books and music. While still in his teens, he joined Paul Rohe & Sons, Booksellers. The shop, which specialized in used and antiquarian books, occupied several locations across Chicagoland, but its most durable home was in the Belmont-Clark area.

After the storefront closed in 1997, Rohe moved to selling books online, making it possible for him to, in his words, “keep putting good books into people’s hands.” He built a reputation for independence and honesty in the trade, taking seriously Jake Zeitlin’s idea that sellers of out-of-print and rare books serve as "keepers of the flame of civilization."

Rohe’s dedication to his customers was matched by his support for his fellow booksellers. He served on the Board of Directors of the Midwest Antiquarian Booksellers Association (MWABA) for over 30 years. According to MWABA president Hank Zuchowski, Rohe and his wife, Jeannie, transformed the association’s Chicago Book Fair into “one of the premier book fairs in the country.”

"A book fair is an enormous amount of work, and it's the details that contribute to its success," said retired antiquarian map and book dealer George Ritzlin, who participated in many fairs across the country during his 44 years in the trade. "Chris was always calm and good-natured, even when managing a thousand details. Not to mention his ability to herd cats.”

Rohe was also the President of the Lilette Rohe Ballet Foundation, a scholarship program honoring his mother, who taught ballet in Evanston until her death in 2017.

A quiet man with a wry sense of humor, Rohe was an intellectual without pretension. He valued the arts and literature for the joy and insight they brought. He also loved to travel, visiting Kenya, Costa Rica, Europe, and Japan. He especially loved to visit California, including Big Sur and Joshua Tree National Monument. His family plans to bring his ashes to Big Sur in the coming months.

Ric Addy, former owner of Shake Rattle and Read in Uptown, remembers the support and advice Rohe gave him throughout his career. “Chris knew so much, and books weren’t his only thing. He sold a ton of records, CDs, old vintage magazines and punk fanzines,” Addy said. “I will always be grateful for his big sharing heart.”

Paul Garon of Beasley Books recalls, “I would always look forward to Chris's visits to our shop to deliver postcards for book fair advertising. But I was no longer waiting to get postcards; I was waiting for a visit from a good friend. And as my age began to catch up with me, Chris grew more concerned and kind as he offered more and more assistance. I will never forget him.”

A local memorial is being planned for late summer. Donations can be made to: Openlands. Sign Guest Book at legacy.suntimes.com

Published by Chicago Sun-Times on Jun. 9, 2021.
To plant trees in memory, please visit the Sympathy Store.
MEMORIAL EVENTS
To offer your sympathy during this difficult time, you can now have memorial trees planted in a National Forest in memory of your loved one.
MAKE A DONATION
MEMORIES & CONDOLENCES
Sponsored by Chicago Sun-Times.
0 Entries
Be the first to post a memory or condolences.