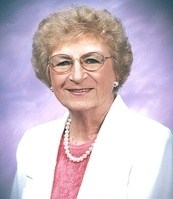 BORN
1926
DIED
2021
ABOUT
Oak Park And River Forest High School
FUNERAL HOME
Moss Family Funeral Home - Batavia
209 South Batavia Avenue
Batavia, IL
Shirley Lois Holter Searles
Born: March 19, 1926
Died: September 16, 2021
Shirley Lois Holter Searles, 95, of Batavia and resident of the Holmstad Retirement Community peacefully passed away September 16, 2021, surrounded by her loving family.
Her life was a full one; one filled with friendship, kindness, determination, along with some heartache mixed in; but overall, Shirley's story is one of strength and unwavering love – especially for her family.
Shirley was born in Oak Park, Illinois on March 19, 1926, to loving parents Oscar and Agnes (Johansson) Holter. The untimely death of Oscar two weeks prior to Shirley's third birthday contributed to the development of generations of strong, capable women. Her widowed mother faced many challenges while raising two young girls during the depression, working many jobs to support the family. During that time, Shirley's sister Marge, eight years her senior, stepped in to help raise her, becoming her second mom and forever her best friend.
Shirley met the love of her life, LeRoy (Lee) C. Searles, at a young age as they grew up together in Oak Park. Besides the friendship of their mothers, the two shared the common bond of losing their father as children. After graduation from Oak Park River Forest High School, Lee enlisted in the Marine Corp, fighting in three campaigns in the South Pacific during World War ll. On September 20, 1947, the two cemented their friendship and love forever when they married.
As a couple, Shirley and Lee enjoyed a wide circle of friends and were blessed with one daughter, Marcia. Although she was a stay-at-home mother, her life was not slow-paced, as she was a Girl Scout leader and eventually became a recruiter for the Girl Scouts. The Mount Prospect Women's Club was another organization benefitting from Shirley's support; she was a member for years serving as president and treasurer.
After Lee's retirement, the couple split their time between Bloomingdale, Illinois and their golfing community in Seven Springs, Florida. Unfortunately, their dreams of traveling during a long retirement were dashed when Lee was disabled. Shirley was his devoted caregiver for 12 years, until he passed away in 1999. She continued to divide her time between the two states, playing golf and bridge whenever she wasn't busy with her family or volunteering. She even became a devoted Cubs fan.
In 2009 Shirley chose to remain close to Marcia and her family, moving into Batavia's newly constructed Town Center at The Holmstad. The senior living community offered her the opportunity to rev up her volunteering, building many new friendships along the way as well. She happily said yes when help was needed, serving as a member of The Holmstad Life Enrichment Group. She was a greeter to guests attending events and was a writer for the quarterly community newsletter, the Trumpet. Shirley called it an honor to interview and write mini biographies for new residents along with other stories.
On the more serious side of her later years, Shirley volunteered for the Rush Memory Alzheimer Study Program. Participants underwent a series of memory tests each year, along with analyzing their reasoning abilities. As her final contribution to this program, her brain was donated to science.
Shirley was most proud of her loving family – daughter Marcia and her husband Ken, grandchildren, Jared, Taryn ( Brian Schiesser) , Kyle(Samantha Garon) Boyce, and especially great granddaughter Falyn Soto. As the matriarch of an extended family, her two nephews, Gary and Keith were like sons to her. The family appreciated that Shirley took time to learn about all interests of family members and friends, so she could have meaningful conversations with them. This effort didn't go unnoticed as her grand, and great grand nieces and nephews all live out of state, but still found time to visit often. All will miss her dearly.
In addition to her immediate family, she is survived by Nephew Gary( Val) Johnson, Monica Johnson, great nieces and nephews Brett ( Kari) Johnson, Tracey ( John) Karam, Blythe ( Rob) Edwards, Whitney(Mark) Walker and Jennifer( Jason) Lagasca and eleven great great nieces and nephews.
She joins her loving husband LeRoy, sister Marjorie Holter Johnson, and nephew Keith Johnson who preceded her in death.
A memorial service to celebrate Shirley's life will be held 12 p.m. noon Saturday, October 9, 2021, at Moss Family Funeral Home, 209 South Batavia Avenue, Batavia, IL. Visitation will be held from 11 a.m. until the time of the service.
To honor her memory, please direct memorial contributions to the Benevolent Care Fund, C/O The Holmstad, 700 West Fabyan Parkway, Batavia, IL 60510.
For additional information contact Moss Family Funeral Home, 630-879-7900, or www.mossfuneral.com