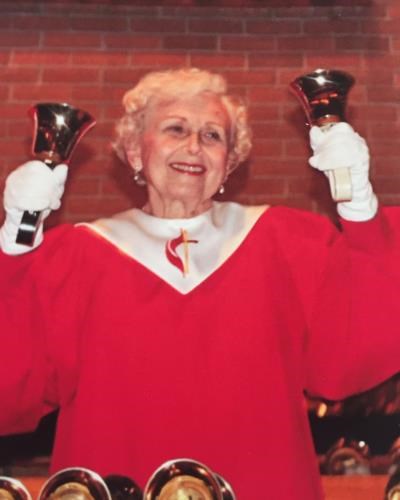 BORN
1927
DIED
2018
ABOUT
Thornton Township High School
Lorena May (Burnell) Campbell, 91, died peacefully at her home in Olympia Fields, Illinois, on October 5th, 2018. Lorena was born June 25th, 1927, to the late Rue Burnell and Portia (Whitaker) Burnell. After graduation from Alliance High School, she attended Mount Union College, in Alliance, Ohio, graduating with honors in 1949, with a Bachelor's Degree in Public School Music. While still in college, she became the organist for the Christ United Methodist Church in downtown Alliance. In June of 1949, Lorena married her high school sweetheart, Richard (Dick) Campbell. Settling in Youngstown, Ohio, both she and Dick taught music in public school systems, Lorena teaching choral music (all grades) in the nearby Brookfield School District. She left full-time teaching to shepherd her five children through their early years, continuing throughout as church organist and accompanist, and choir director of youth and children's choirs. Lorena served in the music ministry of church congregations in Niles, OH, (First United Methodist Church), Youngstown, OH, (Pleasant Grove United Presbyterian Church), and - following the family's move to Homewood, IL in 1964 - directed youth choirs in Harvey, IL, (First United Methodist Church.) In the 1980s, she founded the adult and two youth handbell choirs at St. Andrew United Methodist Church in Homewood, IL. Lorena also became a spirited and sought-after solo performer with handbells. Through their 64 years together, Lorena gave freely and generously of her talents, experience, and energy to support her husband Dick, and the choirs and ensembles he directed - behind the scenes for the Concert Choir at Thornton Township High School - and as an enthusiastic member and accompanist for the choral ensembles Wondrous Love and A New Song, who performed widely in the south suburban community. Her Christmas parties saw the Campbell home overflowing with young singers, laughing, playing old-fashioned parlor games, and caroling together late into the night. Lorena was a lovingly involved mom to five children. She attended hundreds of piano recitals, school concerts, and marching band parades, and for each birthday and every holiday she would create a special celebration. Many summers, the family hiked and camped together at state parks and national parks throughout the U.S. and into Canada. And for many years, there were also seasonal trips to spend time with Lorena's and Dick's sisters and brothers, sometimes with a cacophony of nephews and nieces and grand-nephews-and-nieces, sometimes with just the siblings enjoying each other's good company. After their children were grown, Lorena and Dick continued traveling on their own, delighting in trips abroad, as well as season after beautiful season of exploring the U.S. in the RV. Always deeply involved with her church community, Lorena gave whole-heartedly of her time, and in donations to her church as well as to Mount Union College, Glenwood Academy (formerly Glenwood Boys School), Laubach Literacy (for which she and Dick both volunteered), and numerous environmental and humanitarian organizations worldwide. Lorena was preceded in death by her beloved husband Richard (Dick) Robert Campbell, and by her five older sisters and brothers. Lorena is survived by her younger brother, Roger Burnell, of Golden, Colorado; by her children: Mark (and Danette) Campbell of Trenton, KY; Dian Campbell (and Jeff McLean) of Port Townsend, WA; Duane (and Deborah) Campbell, of Pflugerville, TX; Gwen RisingSun of Minneapolis, MN; and Joyce (and Doug) DeWitt of Mundelein, IL; by her four grandchildren, Alex (22 y.o.), Rowan (20), Kess (18), and John Mark (8), and by numerous nieces and nephews. In lieu of flowers, the family requests that donations be made to the National Parks Foundation: www.nationalparks.org/tribute Lorena May was full of energy, smiles, and optimism, and she will be remembered for her great, enduring love of her family and friends, of the beauty of spring flowers and trees in full autumn glory, and of music.

Published by Chicago Tribune on Nov. 3, 2018.
To plant trees in memory, please visit the Sympathy Store.
MEMORIAL EVENTS
To offer your sympathy during this difficult time, you can now have memorial trees planted in a National Forest in memory of your loved one.
MAKE A DONATION
MEMORIES & CONDOLENCES
3 Entries
So many loving memories of Lorena, from playing at our wedding in 1982 to weekly phone conversations in the year before she passed. It was a joy and honor to have known her. May the Lord Bless her and keep her always.
Diane McConnell (Carlin)
October 6, 2019
Please accept my condolences with the loss of your loved one.
Psalm 23:3
SC
November 3, 2018
Will always remember the 5 years as pastor at First United Methodist in Harvey, IL when Dick was choral director and Lorena the organist. Wonderful musicprobably the finest in my 40 year career. Her skill was only matched by her generous spirit.
Rev. John Alan Boryk
November 3, 2018
Showing 1 - 3 of 3 results