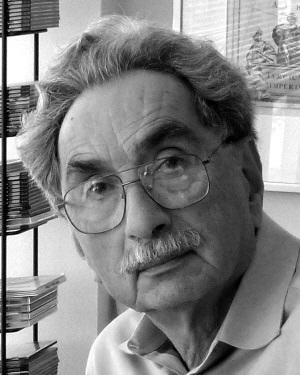 For his gentleness. There were no gentler

For his friendliness. He made friends easily and they were "keepers."

For his positivity. Always a kind word for all friends and acquaintances.

and, his love for Chicago: This was his home.

Rest in peace my friend
Jay Chatterjee
September 15, 2015
I will always remember your family's kindness. You helped me with my CAF project on the rehab of the Chicago Theatre for the AIA guide. My prayers are with you.
Janice (Mrs. Peter Elliott) Ffeinglass
March 24, 2015
I am sorry for the loss of your loved one. May the God of all comfort be with the family during this difficult time. 2 Cor 1:3
KA
February 14, 2015
Margery - My deepest condolences on the recent passing of your husband. His academic accomplishments and work resume were exceptional. I'm sure Metropolitan Chicago is a better place because of his focus on the public sector. My prayers are with you. Frank Donato (RERC)
February 12, 2015
We are so very sorry for your loss and pray that the Lord comforts you and your family at this time. We noted the article in the newspaper- he clearly had a distinguished career.
Nicholas Jannotta
February 12, 2015
I work at the Chicago Theatre taking guests on tours of the building. We pass a brass plaque in the lobby with the names of Suhail and Margery and many others who funded saving and re-using that iconic landmark. Without them there would be no Chicago Theatre today. Condolences to Margery and family .
Richard Sklenar
February 10, 2015
Rest in Peace Mr Al Chalabi, your achievements made us proud to be Iraqis. My condolences to family and friends.
Rana Al-Munshi
February 10, 2015
Margery and family - my deepest sympathy. Suhail was clearly a very knowledgeable man and a professional with such a warm and kind spirit. Sheila Miller
February 9, 2015
My sincerest sympathies. It was a pleasure to have worked with him. Mary
February 8, 2015
My sincere condolences to family and friends. May the God of all comfort strengthen you.
February 8, 2015
Beyond great depths of intelligence and professional skill, Suhail was an incredibly warm, gentle and ethical man. A clearly loving partner to Margery. A great friend. Joan and Hank
February 8, 2015
Showing 1 - 12 of 12 results