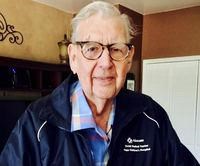 Samuel Carl Lassandrello, of Orland Park, Illinois, died at the age of 97. He was born in Chicago, Illinois, the son of Italian immigrants, Frank and Grace Lassandrello. Sam served in the US Army in WWII in the artillery. Following his time in the army, he worked as the head maintenance man for Neely Printing Company, in Chicago, until his retirement in 1987. He was an avid fixer upper and was constantly helping his children with their home projects. Sam and the love of his life, Marie, celebrated their 75th wedding anniversary in June of 2021. He is survived by his wife, Marie (Martorana), his children, Geri (Bob), Joyce (Gary), Joann (Dan) and John (Kathy); along with 5 grandchildren and 7 great grandchildren. He is preceded in death by his parents and two of his brothers, Joe and Jimmy. At the request of the family there will be no service at this time.

Published by Chicago Sun-Times on Nov. 23, 2021.
To plant trees in memory, please visit the Sympathy Store.
MEMORIAL EVENTS
To offer your sympathy during this difficult time, you can now have memorial trees planted in a National Forest in memory of your loved one.
Funeral services provided by:
MIDWEST MORTUARY SERVICE, LTD
MAKE A DONATION
MEMORIES & CONDOLENCES
Sponsored by Chicago Sun-Times.
0 Entries
Be the first to post a memory or condolences.