Rafael Torch
ABOUT
Cristo Rey Jesuit High School
FUNERAL HOME
Drake & Son Funeral Home
5303 North Western Ave
Chicago, IL
Torch, Rafael 36, passed away peacefully on December 12 after a courageous four year attempt to eradicate sarcoma, a rare form of cancer. In the end he was at his home surrounded by close family and friends. A native Chicagoan, Rafael was born on August 15, 1975. He spent his coming of age years in Cleveland, OH where he graduated from Benedictine High School. He also graduated from Antioch College and obtained a Master's Degree in Humanities from the University of Chicago in 2005 where he received numerousacclaims for his writings including the Illinois Arts Council Literary Award. Rafael dedicated his life to impacting lives of high school students. As a teacher at Cristo Rey Jesuit High School in Chicago, The Latin School of Chicago and The Meadows School in Las Vegas, NV Rafael influenced hundreds of minds as he challenged his students to rise to their greatest potential. His students had a profound impact on his life and he cared for them deeply. Rafael was also a committed, passionate writer who drew upon personal experiences to find inspiration. Rafael, whose award-winning work and vivid essays have appeared in many journals including Crab Orchard Review, Antioch Review, the North American review, as well as other on and offline publications, wrote with honesty, insight and wit. In his honor the annual Rafael Torch Scholarship was established so that promising high school student writers can attend the Young Writer's Workshop at Southern Illinois University in Carbondale, IL. Rafael is survived by his beloved wife, Emily Olson-Torch, a beautiful 4 month old son, Rocco James; his parents, Tom and Tari Sweeney; a sister, Caitlin all of Shaker Heights, OH; uncle Chris Torch of Stockholm, Sweden; uncle Lee (Cathy) Clasper-Torch of Providence, RI; mother-in-law, Cyndy Olson, sister-in-law Amanda (Justin) Anderson, brother-in-law Trent Olson, nephew, Ryker Anderson, niece, Dessa Anderson - all of Morris, IL, as well as numerous cousins and friends. He is preceded in death by his grandparents Carl Torch and Sondra Hamilton, as well as his father-in-law, James Olson. Visitation will be Wednesday, 4 to 9 p.m., at Drake and Son Funeral Home, 5303 N. Western Avenue, Chicago. Funeral services Thursday, 10 a.m. at Fourth Presbyterian Church (126 E. Chestnut Street, Chicago), where Rafael and his family are members. Interment will immediately follow at Evergreen Cemetery in Morris, IL. Arrangements entrusted to Dignity Memorial. Because education played an integral role in Rafael's life, preferred form of remembrance may be directed to a scholarship fund for his son, Rocco James Torch.

Published by Chicago Sun-Times on Dec. 13, 2011.
To plant trees in memory, please visit the Sympathy Store.
MEMORIAL EVENTS
To offer your sympathy during this difficult time, you can now have memorial trees planted in a National Forest in memory of your loved one.
Funeral services provided by:
Drake & Son Funeral Home
MAKE A DONATION
MEMORIES & CONDOLENCES
Sponsored by Colleen Dieter, Rafael's Cousin.
36 Entries
Thank you for that. We miss him every day. Keep leading your life as he taught you...in his memory. He would be proud of you. He loved teaching...most especially you students. 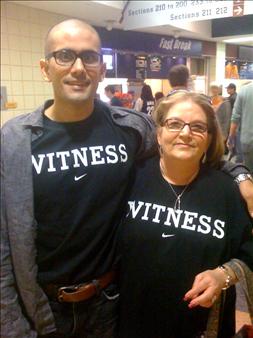 A poem for Rafa from his grandmother and mother: It was his grandmother's favorite and she was his favorite person - she was instrumental in his being the person he was today. (She was also a teacher! Taught behaviorally and emotionally handicapped children for 45 years) Think of him this way.

Laugh as we always laughed
At the little jokes we always enjoyed together
Play, smile, think of me, pray for me
Let my name be ever the household word that it always was
Let it be spoken without effort
Without the ghost of a shadow in it

Life means all that it ever meant
It is the same as it ever was
There is absolute unbroken continuity
What is death but a negligible accident?
Why should I be out of mind
Because I am out of sight?
I am waiting for you for an interval
Somewhere very near
Just around the corner
All is well.

Kim Groninga
nonfiction editor, North American Review
Kim Groninga
December 14, 2011
Rafael will live forever within the young minds of his former students; thank you for sharing him with them.
Our thoughts and prayers are with you today as they have been over the course of many months. Lauren and David Harvey, parents of Eric and Samantha Harvey.
Lauren Harvey
December 14, 2011
Em
You, Raf and Rocco have been and will continue to be in our thoughts and prayers. We love you and we hope you know that you were an angel in Raf's life.
Linda & Randy Poznansky
December 14, 2011
My condolence to Mr. Torch family. He was a great teacher, he brought alot of motivation to Cristo Rey High School and I'm glad that I had a chance to be one of his student. Your son is going to be proud of you when he learns all the accomplishments and impacts you did for yourself and others. You will be missed, and may you rest in peace.
Guadalupe Ceja
December 13, 2011
Raphael and I shared some great times over the years and I am lucky to have called him my friend. Emily, my condolences go out to you, Rocco and your families. Please know that there is always a special place in my heart where Rafael resides and that his memory will be alive and sacred within all those whose lives he touched.
Zachary White
December 13, 2011
Emily, I am so sorry for your loss. There are no words...My thoughts and prayers are with you and Rocco and your entire family during this most difficult time. May you find comfort in the memories that you have shared. His spirit will live on through Rocco. God bless you.

Michelle DeLuties
Michelle DeLuties
December 13, 2011
Dear Emily and family,
We met last winter at the reading that Raphael gave at Antioch. I was so moved by his writing, and the story of your struggle with illness and courage and optimism in the face of that. My deepest condolences to you and your family in this time of loss. Raphael was a beautiful soul, and you both shared what seemed like a rare and momentous love. Dennie Eagleson, Yellow Springs, Ohio
Dennie Eagleson
December 13, 2011
You will be missed but now you are an angel above watching over us.
Esmeralda Navarrete
December 13, 2011
Mrs. Torch
Im sorry for your loss. . .Mr Torch was a great teacher.
Natalie
December 13, 2011
Love to the whole family. Rafael and I had a special connection during his Antioch years, as I was charged by his uncle Lee to support him. It was good to have someone who understood my Quaker commitments in the Antioch context. I am happy I got her hear his reading at Antioch a few months ago. What a loving presence he was on earth!
Cheryl Keen
December 13, 2011
Emily, we were all so sorry to hear about your loss. I was amazed to hear about everything that Rafael accomplished during his lifetime. Our thoughts are with you during this difficult time.
Pam Monaghan
December 13, 2011
Emily and Rocco,
I am so sorry for your loss. Words seem so empty when I know they couldn't possibly begin to fill the hole left in your world with the loss of Rafael. I hope you will surrounded by your friends and family.
Love always
Jamie
Jamie Kolb Conner
December 13, 2011
Emily, I am so very sorry for your loss, and know my thoughts and prayers are with you. Love that glorious son that you both shared and know it is Rafael's spirit that resides in that lovely child.
Julie Coulton
December 13, 2011
I can't tell you how much sadness this brings me, although of course not unexpected. Wishing you strength, love and peace as you work this loss through. Chris Torch
December 13, 2011
Emily, it is with a very heavy heart I hear of your husband's passing. I can't even begin to tell you how sorry I am. Please know that you are in my thoughts, my prayers, and in my heart always. Rafael was a lucky man to have you and little Rocco in his life, if even for just a little while.

We are so sorry for the loss of this beautiful and talented man. His legacy of writing and teaching is a gift to his community, his students and his loved one.

Our prayers and thoughts are with the two of you and your extended family as you move through this difficult time. We know Rafael will always be with you and we know you brought him incredible joy and love.

The Bradner/Burnham family
December 13, 2011
There are no words. The obituary was breathtakingly beautiful. Sending love from Boston.
Kel Kelly
December 13, 2011
Emily, you are in our thoughts and prayers. Please accept our dearest condolences on the passing of Rafael. He was obviously a blessed man to have you as his wife and for your beautiful son. All our love - The Finnegans
Sean Finnegan
December 13, 2011
Showing 1 - 36 of 36 results