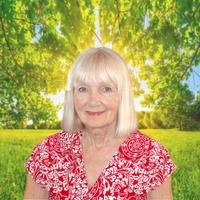 Milda Stase Harris (nee Jurkunas), 81, a Lithuanian World War II refugee, died at home in Palos Park, Illinois on Saturday, October 30, 2021. Milda was born on April 20, 1940 in Gelvonas-Ukmerge, Lithuania during World War II. She was the only child of Stasys and Sophie (nee Cirbulis) Jurkunas, who met in Gelvonas when Sophie went to work at Stasys'clothing factory. They were married in Kaunas, Lithuania on August 29, 1937.

Milda and her parents, along with members of her father's extended family, including his sisters, Teofile and Stefanija and Stefanija's daughter, Milda, secretly fled Gelvonas in the middle of the night. Stasys' brother, Jonas (John), fled later. They expected that they would return to their homes when the Soviet Union was once again repulsed. However, thirty years would pass before they were able to do so. Their travel proved to be a formidable task: Milda's father, Stasys, rode a bicycle and Milda and her mother, Sophie, rode in a horse-drawn wagon. They traveled under the cover of darkness while attempting to avoid areas of military conflict. Despite these measures they endured aerial attacks during their escape, which eventually ended in Germany.

As the family traveled, they sought work, food, shelter, and safety where they could and for a while, stayed on the farm of an Austrian baroness where Sophie worked at various household chores and occasionally stuffed eggs inside her blouse to provide food to Milda and her cousin. Stasys performed tailoring for the baroness' household. After the war's end, Milda and her family resided in the Merbekas Displaced Persons Camp, Meerbeck, West Germany.

Milda's uncle, Stasys Cirbulis, had moved back to America prior to the war to avoid Soviet military conscription. While at Merbekas, Sophie was assisted by a Lithuanian-American soldier in locating her brother through St Michael's Church in Chicago. Sophie was an American citizen by birth. Her parents, Viktoras (Victor) Cirbulis and Marija (Mary) Vilkelis, separately emigrated from Lithuania to the United States in 1910. They met in Wicker Park, lived, and married at St. Michael's Church on October 6, 1913. Sophie was born there in 1916 and in 1922 her family moved back to Lithuania, settling on her parent's farm near Gelvonai. Since Sophie had been born in America, Sophie and Milda were able to get the necessary documents from the U.S Consulate for her and Milda, a U.S. citizen because of her mother, to come to the United States.

Milda's family settled in Wicker Park, where her parents worked in clothing factories near Chicago's downtown and tailored, making clothes for private customers nights and weekends from their home. The nuns from Milda's school cared for her until her parents came home from work. Milda kept in contact with one of them until she died several years ago. In 1951, fulfilling the American dream, her parents purchased an apartment building in Chicago's Marquette Park neighborhood, then home to a large Lithuanian community, where they opened Marquette Fashions, a dress shop.

Milda first attended Saint Michael's school. There were only two classrooms in the school, each consisting of four grades. After fifth grade, when she was eleven years old, she transferred to Nativity B.V.M. (Nativity of the Blessed Virgin Mary) grade school. She graduated in 1954. Then she attended Maria High School and graduated in 1958. Some of her lifelong friends were classmates. She received her B.S. in Science Commerce at DePaul University in 1962 and her M.S.W. in Social Work at Loyola University in 1972.

On August 12, 1961 Milda married Edmondas (Eddie) Paulius, who she met while she was in high school. While living in Lincoln Park during the 1968 Democratic riots, people were tear gassed in the park. Tear gas seeped through the windows and into their apartment. They were overcome by tear gas. They divorced in 1974.

Milda worked as a case worker in nursing homes. She was then employed as a supervising social worker for the Cook County Department of Public Aid Children's Division, which later merged with the State of Illinois Department of Children and Family Services. There, she met Lee Harris in the summer of 1974 when they passed each other in the hall.

On December 24, 1974 they went on their first date to Senese's Winery. Milda briefly moved to Los Angeles, California during their courtship, but love brought her back to Illinois. Milda and Lee married on November 28, 1976 at the Wayside Chapel in Palos Park. Their daughter, Milda Harris, was born on October 1, 1977. Milda was heavily involved in her daughter's childhood activities and loved being a mom.

Milda met former First Lady Rosalyn Carter in the White House while attending a meeting with her husband in 1978. Lee became a White House advance man for the President during Jimmy Carter's reelection. Milda and Lee had lunch at a Hickory Hills restaurant with Carole King while she was campaigning with Lee for U.S. Senator Gary Hart's presidential campaign. Later, Milda met Senator Hart at a delegate gathering, chaired by her husband, who was the head of his state delegation to the 1984 Democratic Convention.

In 1987 Milda retired from her job at the Illinois Department of Children and Family Services. Later she began working as a substitute teacher. She retired in 2012 to attend to her ailing mother and cousin.

Milda's favorite vacation spot was Union Pier, Michigan. She loved going to the beach and meeting up with her friends. During her life, she traveled through Canada, Mexico, Europe, Russia, Lithuania, Martinique, Jamaica, and most of the United States. Milda's favorite flowers were roses and sunflowers. Her favorite childhood song was "You Are My Sunshine." Her favorite singers were Nat King Cole, Diane Krall, and lately country music. Milda enjoyed her daily crossword puzzles and more recently, had become addicted to Words with Friends. Milda hosted and cooked for many gatherings of friends and family. She was a talented artist. She loved animals, particularly cats and had numerous pets including cats, dogs, doves, guinea pigs, rabbits, and fish. Milda was a voracious reader and lately read about two books a week and numerous magazines. She enjoyed watching Live with Kelly and Ryan, The View, Judge Judy, Jeopardy, Saturday Night Live, as well as numerous shows on PBS, and many mystery television shows. She was a loving wife and mother who adored her daughter and always looked forward to her grandchildren's visits.

Mrs. Harris was preceded in death by her parents, Stasys (Stanley) Jurkunas and Sophie (Sofija, Zofija) Jurkunas (nee Cirbulis). She is survived by her husband, Lee Harris of Palos Park, IL, her daughter Milda (Brett Gilbert) Harris of Calabasas, California, her twin granddaughters Citrus Stase Gilbert and Zofija Isabel Gilbert, and by nieces, nephews, and cousins in the United States and Lithuania.

Published by Chicago Sun-Times on Nov. 14, 2021.
To plant trees in memory, please visit the Sympathy Store.
MEMORIAL EVENTS
To offer your sympathy during this difficult time, you can now have memorial trees planted in a National Forest in memory of your loved one.
MAKE A DONATION
MEMORIES & CONDOLENCES
Sponsored by Chicago Sun-Times.
1 Entry
For my mom: You were the best mom and I loved you so much. I appreciate all the running around you did when I was a child. I especially remember the Saturdays when we used to stop and get candy at JJ Peppers before Lithuanian Saturday School, and then after school, we´d be off to Lithuanian Girl Scouts, and afterwards, we´d either stop at Baba´s (Sophie Jurkunas) or go to ballet class. I remember you doing lots of work with the Mother´s Club at Nativity BVM and I know you made lots of friends there with the other parents. Thank you for loving my friends as much as I did. Oh, and thank you for helping dad throw the most epic childhood three day birthday parties! Everyone still remembers how much fun they were! I got my love of reading from you and dad and I am so happy you introduced me to some great books and authors like Gone with the Wind, Dean Koontz, Sue Grafton, and Ruth Ware. I´m really excited to start reading Ruta Septys. I loved talking about books with you and I know that you read every single book I wrote. You were ever so proud of all of my accomplishments and were always encouraging of my dreams. I´m so glad we had so many pets growing up. I know they all held a very special place in your heart. Cats: Lovesy, Murke, Gin-Gin, Margius, Chauncy, Toonces, Cleopatra, Jynx, Aristotle Purrkins, Oliver, and Diva, who was Teta Aida´s cat (and those that preceded me: like El Kabong, Julius Ceasar, and Princess). Dogs: Napolean, Alexander, Atari, Cana, Sasha, Molly, Belle, Dillon, Baba´s dog Kanu, and I know you adored your grandpuppy, Licorice. Rabbits: Hoppity Rabbit, Rascal Rabbit, and Roger Rabbit. We also had doves called The Coo Family, Guinea, who became the mommy of many guinea pigs, and numerous fish. I love animals just like you. Our summers in Union Pier are some of the best memories, from going to the beach to visiting all of your endless groups of friends to all of the little parties you threw at your own cottage. You were a wonderful host and so many people we´ve talked to loved the small and large gatherings you hosted at our house for our family or with your friends. I enjoyed your visits to California and we had so much fun going out to lunch and meeting up with your friends (you had friends everywhere!) and relatives. The twins and I couldn´t wait to come visit you and dad in Illinois too. I´m glad Citrus and Zofija got to see Union Pier with you and they really enjoyed swimming in Lake Michigan and visiting your favorite spots. On our last visit this past July, the twins loved watching Homeward Bound and all the other cat and dog movies we found. They always talk about it. I enjoyed watching your cooking shows with you, Live with Kelly and Ryan, The View, Judge Judy, Jeopardy, as well as all the shows on PBS, especially the mysteries since I like those too. I loved always going to get our nails and hair done and going shopping. Thank you for all the wonderful memories and a lifetime of love and support. I love you so much. Love, Milda
Milda Harris
Family
November 15, 2021
Showing 1 - 1 of 1 results