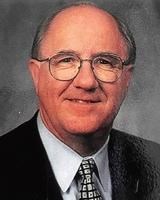 Graham was born October 29, 1941 in Danbury Castle in the County of Essex in England during World War II. His family traveled on the Queen Mary to America landing on Ellis Island in New York harbor when he was just five years old. They settled in La Grange, Illinois where Graham grew up. He attended Fenwick High School and Loyola University in Chicago majoring in Business Administration. It was during his college years that he met his wife of fifty-seven years, Patricia Norine Wenskus. They married in 1964 and had five children. They moved often with each of Graham's positions but made lifelong friends living in Arlington Heights,IL, Cleveland, OH, Lincolnshire, IL, Buffalo, NY, Toronto, Ontario and finally settled again in Lincolnshire where they have lived for the past thirty years. Graham began his career at Moore Corporation in 1964. He spent 28 years with the company including leading FN Burt, a subsidiary of Moore Business Forms in Buffalo N.Y., then on to Toronto, Canada as President of Moore Canada Corporation, and then back to Chicago as President of the U.S. Business Forms and Systems division. Graham continued in the field with Quebecor Inc in Montreal until embarking on his own journey starting Global DocuGraphix and then as Owner and CEO of D2Xchange, LLC in Denver. Graham enjoyed cooking for his family and friends. He found trying new recipes to be fun and relaxing while watching the Bears on Sunday. He was an avid golfer throughout his life and a member of his beloved Monterey Peninsula Country Club in Pebble Beach, California. He loved visiting Carmel and hosting family and friends. From cruising down 17-mile drive to picnicking with wine and cheese by the ocean, Graham was happiest in this place. He is survived by his wife, Patricia. His brother, Dick McClean, and sister, Margaret (Tom) Johnson. He is also survived by his five children, Ann (Ken) VanOverberghe, Karyn (Greg) Campbell, Richard (Jennifer) McClean, Christopher McClean and Matthew (Rula) McClean. And by his eleven grandchildren Nicholas, Allison, and Christopher VanOverberghe; Megan, Jim and Julia Campbell, Madison, Brandon, Christopher and Connor McClean and Isabella McClean. He was loved and will be missed by all. Visitation is at 10 am followed by a Mass at 11 am at St. Patrick's Church, 950 W. Everett Road, Lake Forest, Illinois on Saturday, September 18, 2021. A lunch will follow immediately after the ceremony. In lieu of flowers, memorial contributions may be made to the Boys and Girls Clubs of Monterey County P.O. Box 97, Seaside, CA 93955 . Info: Wenban Funeral Home, Lake Forest (847) 234-0022 or www.wenbanfh.com