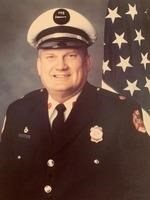 Eugene C. Herman "Gene", age 85, of Manhattan formerly of Chicago, passed away peacefully on Friday, August 13, 2021 at his home with family at his side. Survived by his loving wife of 58 years Geraldine "Geri" (nee Woodville), his devoted children Kristi (Mark) Walkowski and John (Donna) Herman, his grandchildren Nicole (fiancé Joe Santelli) and Matt Herman and Christopher, Kelsey and Hayley Walkowski, his brother Harry (Sharon) Herman, his sister Sue (Richard-deceased) Howe, loving nieces, nephews, and cousins and his faithful canine companion and hunting buddy, Woody. Preceded in death by his parents Harry and Edythe Herman and one infant sister. Gene was born and raised in Chicago. He was a graduate of Chicago Vocational School and attended Southern Illinois University. Gene proudly served his country with the U.S. Marines. He was a fireman for Chicago Fire Department retiring as Lieutenant after 30 years. Throughout Genes life he loved carpentry and woodworking. He enjoyed the Chicago Bears, hunting with his many dogs throughout the years and attending countless sporting events for his grandchildren. Gene led a full life, a loving husband, dedicated father, grandfather, brother, uncle and friend and he will be dearly missed by all who knew and loved him. A Mass of Christian Burial will be held on Saturday, September 11, 2021 at 11:00 A.M. at St. Joseph Catholic Church, 235 W. North St., Manhattan, IL 60442. Inurnment will take place at Holy Sepulchre Cemetery, Alsip, IL at a later date. In lieu of flowers, donations in Gene's name to the Alzheimer's Association by visiting www.alz.org would be most appreciated. Arrangements entrusted to Forsythe Gould Funeral Home, 507 S. State St., Manhattan, IL 60442, 815-478.3321, www.forsythegouldfh.com.