Ponce, Derrick Lambert (Rick) well-known Chicago artist and musician, succumbed to his long battle with cancer on February 9, 2010. Born in Chicago on June 10, 1969, he was the son of legendary jazz musician, Tommy Ponce, and jazz vocalist, Linda (Holmes, Ponce) Dellorto. An underground punk icon, Rick was a driving force on the Chicago hardcore music scene. He was a member of countless bands, including Disrobe, Rat Bastards, Snoopeeze Tapeworm, Fleabag, and Uncle Brown Eye. A multi-talented musician, Rick played classical, Flamenco, blues, and rock guitar, bass, and drums, as well as writing for various bands and singing back-up vocals. Also an accomplished visual artist, Rick won a scholarship to the Art Institute of Chicago, and won numerous awards for his artwork. Many of his images were used on his bands' tee shirts, posters and album covers. Rick was well known for his great sense of humor and his love of "B" horror movies, having amassed an impressive collection of horror and sci-fi movies and collectibles. He is survived by his mother, Linda, brothers Renato Ponce (nephew Tyler) and Ron Ponce, and also brothers Tommy, David and Brian Ponce, and sisters Kirsten Rodriguez, Anesha Wynter, and Vicki Ryan. Pastor Ryan Sutton will officiate at a memorial service to be held on Saturday, February 20, 2010 at 11:00 AM, at the Federated Church of Wauconda, 200 S. Barrington Rd., Wauconda, IL. At Rick's request, his remains were donated to the Anatomical Gift Association of Illinois. In lieu of flowers, donations may be made in his name to Vitas Hospice at Mercy Hospital, 2525 S. Michigan Avenue, 6th Floor, Chicago, IL 60616.

Published by Chicago Sun-Times from Feb. 12 to Feb. 14, 2010.
To plant trees in memory, please visit the Sympathy Store.
MEMORIAL EVENTS
To offer your sympathy during this difficult time, you can now have memorial trees planted in a National Forest in memory of your loved one.
MAKE A DONATION
MEMORIES & CONDOLENCES
24 Entries
you are still on my mind and in my heart.It feels more empty in this world when we lose people we were close to,It feels like we lose a piece of ourselves,They are always still in our hearts, But part of us goes with them too.I still cant believe you are no longer walking this world,I hope you found your place,I hope you have peace.I hope I will see you again,someday.I miss your friendship so much it hurts,Untill I see you again,I will try to give you a smile instead of my tears..Always in our thoughts,,you are so missed
selena zarate
July 26, 2010
To My Son, Rick

You've been gone since February and it's only now in late July than I could find the strength to go to your Guest Book. I'm so glad I did. Knowing how much you meant to your friends and fans and girlfriends gave me much comfort. You were the most talented boy and man I have ever known. You far surpassed your very talented father in artistry and creativity. You were my oldest and a wonderful source of pride for me and your younger brothers, Renato and Ron. I miss you more than you could ever know, but my thoughts have finally turned to the humor and music and fun you brought to our family.

Rick and I were almost inseparable from age 5 to the end of grade school. We had so much in common. Thanks to him my father’s influence of Segovia and Bach was soon replaced by KISS and Judas Priest! I can’t thank him enough for that. I was excited to find him on myspace a few years ago and exchanged a few emails. It was like old times. Even though I haven’t seen him for 25 years I will miss him.
David Bergman
March 21, 2010
To Rick,

It's been a long, long time since we've last spoken - back in the days of D.O.O.M. I still remember the good times in Hayt School and on the "Highland Express".

I'll always remember you for your talent - and have yet to meet an equal.

Good bye old friend - until we meet again.
James Kaehn
February 22, 2010
To Rick, a good friend
It's colder now that you're gone
Hope you are at peace
Dave Kuch
February 20, 2010
Linda, Renado & Ron - we didn't get the opportunity to personally meet Rick, but he must have been an awesome guy because he was related to you. Our deepest condolences.
Don, Michelle, Danielle & Megan Dellorto
February 20, 2010
Ricky-Fond memories of babysitting for you many times and many different places. You were the cutest! Never got to explain to you why I still gave you coloring books when you were 16. Guess I never want to see people growing old and losing that childlike purity and honesty. Enjoy playing your instruments with the angels.
Vicki Ryan
February 20, 2010
To Rick,my cousin and friend-The memories i have of you,me and Brian growing up were the best times of my life.They are golden,wonderful memories that i will always hold dear and i will never forget the times we had together.Memories...from the first day i met you when you came from Canada,to you getting me in a world of trouble with my dad after i tortured you by scaring the hell out of you all night when you stayed at place on Pratt;going to Larry's Comic Book Store,bowling at Lambert's Bowling Alley,"The Mota Monsters"(THEY ARE REAL!),going to Old Town and China Town with our parents or going to their gigs when they would jam together,hanging out in that little dive diner that was on Arthur and Clark-eating our plates of fries and playing the jukebox,going to the Pick Congress Hotel in the '70's for comic conventions,and of course our shared fondness and love for horror movies-those were the best of times.Thanks for the memories and most of all,thank you for the true friendship we had.I miss you and i love you,and will always be thinking of you.someday we will be together again.Love,your cousin Don-
don ponce
February 16, 2010
Linda, Renato, and Ronnie,

We are so sorry for your loss. Our prayers and thoughts are with you.
Jose & Lisa Guerrero
February 12, 2010 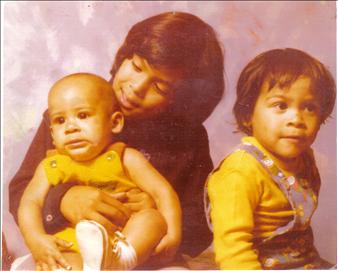 I spent most of my life envying the talent of my brother, only to find out that he envied me.Nothing gives me greater pride than that. You will live in all of our hearts forever.
Renato Ponce
February 12, 2010
Rick, it was a privilege to have known you for the short time that I did. I was always so impressed by your multifaceted talent. Best wishes and deepest condolences to your family.
~Marie
February 12, 2010
We all love you Rick and we will miss you always. Our only solace it that you are no longer in pain. See you when we get there.
Al and Nina
February 12, 2010
To the family, my deepest, heartfelt condolences. Words cannot express my sadness, that I know is shared by many. To Rick, it was a joy and privilege knowing you. You were so inspiring. Your talent was unbelievably impressive, and your friendship treasured by all who were lucky enough to know you. To say you will be missed, is an understatement. You forever live on in our hearts. Rest in peace. Love ya!
Lisa Lent-Craig
February 12, 2010
Dear Linda,
Our thoughts and prayers are with you and your family in this most difficult time.
With love,
Steve and Jackie Galusha
Steve & Jackie Galusha
February 12, 2010
Our deepest sympathy to you Linda, and your family. You are all in our thoughts and prayers. We hope that happy memories will bring comfort to you all.

Fondly, Sandy and Carol Goldman, Rogers Park
February 12, 2010
To the most beautiful, talented, creative, sweet, and loving individual I have ever had the privilege of knowing. You treated me so very well. The happiness you brought to my life is beyond what words can express. You are a great friend and the best boyfriend I ever had. What we were to each other, we still are. I will laugh at the little jokes we used to enjoy together. When I think of you, I will smile. Your name will be the household word it always was. Memories of you will mean all they ever meant. There is unbroken continuity between us. Just because you are out of sight does not mean you are out of mind. The world just got a whole lot sadder without you in it. I'll love and miss you forever, Rick...R.I.P.
Laura Parks
February 12, 2010
Showing 1 - 24 of 24 results