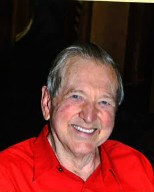 BORN
1935
DIED
2021
ABOUT
Peotone High SchoolThornton Township High School
William Thomas Harding (Bill), 86, died peacefully at his home October 22, 2021. He was surrounded by the people and the things he loved: his family, his cats (especially Louis) and his books.

Bill was born March 2, 1935, in Harvey, IL, the 3rd of 5 children. He was a lifelong learner, reading by the age of 4. Bill's love of books and thirst for knowledge lasted his entire life.

Bill grew up on a farm where he learned to "fix things." His father died when Bill was 15, throwing the family into hard times. To help with finances, Bill began to raise chickens and sheep and worked in a factory after school with his younger sister and lifelong pal, Connie . As young children, they could "disappear all day" as they played on and explored the farm.

Bill attended a one-room schoolhouse from first through eighth grade, starting the schoolhouse stove in the winter. He went on to Thornton Township High School, Class of 1952, where he ran track. He went to Thornton Jr. College but had to take a year off of his studies due to rheumatic fever. That nasty rheumatoid factor stayed with him his entire life and, at about the age of 50, Bill was diagnosed with rheumatoid arthritis which destroyed his body. With all of Bill's setbacks the last few years, he stayed determined to "get my legs and feet back".

Bill graduated from Illinois State University in August of 1957 with a degree in social science. Biology and history were his favorite courses. From 1957-1958, he taught at Chicago Vocational High School. In the summer of 1958, Bill was drafted into the Army and took basic training at Fort Leonard Wood, MO. He was stationed at Fort Bening, GA "where they didn't utilize any of my skills." In August of 1959, Bill was released from service due to a teacher shortage in GA. From 1959-1960, he taught at Jordan High School in Columbus, GA.

In the summer of 1960, Bill, wife Nancy and son Edward moved to Champagne, Urbana, where he went to graduate school to major in psychology. He graduated in 1961 from Illinois State University with a Master's degree in psychology.

Bill worked as a guidance counselor at Peotone High School in Peotone, IL from 1961-1967, He worked summers at Manteno State Mental Hospital.

From 1967-1985, Bill worked as a school psychologist for West Aurora District 129, helping student after student maximize his/her potential while dealing with the politics of school administrators. His creativity and non-conforming to everyday standards set by paperwork and not by the individual, caused him to leave the school system in 1985.

Bill began a private counseling practice, Clearwater Counseling, in the early 1980's and moved from parttime to fulltime when he left the school district. He helped those who struggled to find not only hope but meaning in their lives. Many tributes to his counseling skills have come to both of us over these past few years. "Bill helped my wife and I through difficult times and our coffee visits were something not to be forgotten", said a former client. "My husband and I appreciate all the wisdom he bestowed upon us. He changed lives for the better and truly had a superior gift for therapy", said another.

Bill married Stephanie Weber on May 3, 1996 in a Unitarian Church with a Lutheran Minister. When he set up her computer, May3rd96, was her password chosen by him. The two non-conformists worked together through Stephanie's years running the Crisis Line of the Fox Valley to starting Suicide Prevention Services in 1998. Bill was a founding board member and the wind beneath Stephanie's wings. His wisdom and unique perspectives helped her immensely. They would often tease that she was the kite that kept flying higher and moving faster and faster and he had the string and would hold on to keep her steady. His calm manner was a balance to her activity.

In 2000, in conspiracy with Jack Secrest and Lloyd Jones, the "Philosophers Club " was started. The group grew and grew, bringing academics from Benedictine and scientists from Argonne Laboratory together monthly with like-minded people. Often 25 people would be at the lunch on the third Thursday of each month. The group continues to this day, meeting via Zoom during Covid.

Bill loved the warm summer months, as well as spring and fall. He and Stephanie lived on two acres on the Fox River in North Aurora. The couple bought the house "which was a dump" in 1995, and began that first year of rehabbing on their own, calling in professionals when needed. Over these many years, they've added to the house and made many revisions to meet their needs. "508" was one of their joint passions. Bill loved the "shed/barn" he had built behind the house. He loved working on the house and the land. He was a "collector" (hoarder") of items he would "be given by a friend" (he found on curbs). And, while some of us wondered in awe where all the stuff came from, when something was needed he always had it. He read and studied various topics voraciously. Bill had a brilliant mind and a kind heart. Best of all, his big smile will be remembered by all who knew him. He wanted to leave the earth as he came onto it: owing nothing to anyone but leaving it a better place.

Not to be forgotten are Bill's cats, Louis, Fred, Olive, and Sydney.

Bill was preceded in death by his parents, Richard and Frances (Mack) Harding, his brother Richard Harding and his sister Frances (Frank) Senk.

A celebration of Bill's life will be held at 1 p.m. November 5, 2021, at Enticing Cuisine Banquet Hall, 1117 N. Washington Street in Batavia, IL, on the banks of the Fox River. Bill loved the Fox River, thus the choice of venue. Please dress in jeans or other casual garb.

Donations can be made to Suicide Prevention Services , 528 S. Batavia Avenue, Batavia, IL (www.spsamerica.org). This was one of Bill's passions and loves. He would much prefer that donations go to SPS and that flowers by omitted.

Bill's spirit is in the river and lingering in the air. His smile was a gift to all who witnessed it and he'll be remembered for his gentle nature, his pascifist beliefs, and his brilliant mind. Bill was a thoughtful, kind, and creative. He will be dearly missed.

Published by Beacon News on Oct. 31, 2021.
To plant trees in memory, please visit the Sympathy Store.
MEMORIAL EVENTS
Nov
5
Celebration of Life
1:00p.m.
Enticing Cuisine Banquet Hall
1117 N. Washington Street, Batavia, IL
MAKE A DONATION
MEMORIES & CONDOLENCES
11 Entries
Thanx for sharing his life and his professional work with us. A beautiful expression of love and harmony. He will be missed. Joe and Dona Popp
Joseph and Dona Popp
Friend
November 5, 2021
There are few words to ease the grief of losing a parent. Remembering stories of time shared together last forever. Thank you Claire, for sharing some with me over the years. Your Dad was a memorable person.
Marie and Ray Chmielewski
November 4, 2021
We only knew Bill for 16 plus years, Bill & Stephanie was one of my 1st customers, when I started my business. Bill always had good advice and would tell me stories about his father growing up. Like all the nails he would pull out of used lumber and then had to straighten them to be re-used. We will miss him very much. Your Handyman & Cleaning Service Jeff & Karen
Jeff & Karen Sibenaller
Friend
November 3, 2021
SO SORRY TO HEAR OF BILL HARDING PASSING. I REMEMBER HIM AS A CHILD AS HE WAS UNCLE BILL. HAVENT SPOKE TO HIM IN MANY YEARS. MANY PRAYERS TO ALL.. RIP
KATHY HARDING WELLS
Family
November 1, 2021
He will be missed, he was a important part of my life growing up. RIP Mr. Harding
Roger Owens
Friend
November 1, 2021
We will miss the breakfast chats, humor and kindnesses from Bill but will forever remember his smile and laugh. May his name be a blessing.
Andy & Julianne Weiss
Friend
October 31, 2021
Bill was such a wonderful kind man. He helped me during some very difficult times thru the years. I will never forget his kindness. I´m so sorry for your loss and pray for your family.
Stacey Crockatt
Friend
October 30, 2021
While I never knew him personally, I feel like have through all the many stories and photos shared by Jen. What a beautifully written memorial of his life. Thank you for sharing him with the world. Your family are in our prayers.
Katie Powell
Friend
October 30, 2021
I am so sorry for your loss. Bill will be missed. His quiet humor was always special. My thoughts and prayers are being sent for you and your entire family.
Lorrie Riemer
Work
October 30, 2021
Praying for you and your family
walker Barbara m
Friend
October 30, 2021
Sorry for your loss.
Sylvia Beverlin
October 30, 2021
Showing 1 - 11 of 11 results